And last night suddenly I felt very bad. And it is not for workout. This is stress. Then, I wonder, how much can I hold?
I'm back on pills. I hate it. I hate pills, I hate when I can't control the things. I hate when I can't be strong enought. I hate unfair things.
First goal for people seems be always get material things. Even if they feel empty inside, even if they also think about suicide, you can see them running behind material things. I found someone who is not in this way... but this person is stucked to someone else who just care about material things, about take adventage, about use others to get more and more, and I wonder... wath is that make them be stucked??? Obviously is not love, then what it is? fear to take decisions? fear to face the truth? material interests? People make me sick.

Again I just slept 4 hours, even when I took a pill. And it's just Thursday...

I was looking the pics of the new apartment to see what I will do with all the furniture I have. Of course I can't bring all there. I don't know why I get so many furniture years ago when I end using always the same chair, the bed and what else??? maybe the sofa time to time. I want keep just the basic.
I sitll need throw more and more things in the trash. Every time I organize my stuff I feel like throwing everything, clothes, shoes, ornaments, books, plates, even paints. And I will do. I want let everything in the past and start again.
So it has 1 restroom and 1 bathroom. I was thinking... maybe can I use the restroom like Make up room?

Btw I think I will buy a microwave. So at weekend I can cook for all the week and keep it in the freezer, and when I get home I just need use the microwave to heating up the food.

I don't like talking shit about other ppl in my journal but today I lost my patience.
This week my boss shouted to a coworker who was not doing his work correctly. Then she admonished him and make him lost work days. That is ok. But mostly of the things she heard about the work of this guy is from my other coworker, the fat asshole.
This fat ass is late almost every day, and he never does all his work. But he works here since 10 years and know so much about technical things. He is the guy who smells as hell because he doesn't take shower every day. I think his weight is 330lb, he sweat even in winter, he smokes, and he is always making uncomfortables jokes. So this week this asshole spoke to my boss when the other guy came late to work because "toothache" to tell her how bad is the work that the guy is doing.
Then yesterday fat ass came late to work... as usual. Today? again he was not in time when we open the office. Administrative manager called him but asshole didn't pick his phone at all. At midday he showed up. He wore the shirt of our company, sport pants..... and flip flops

He stayed here less than 1 hour then he went back to his house. The reason for what he didn't work and can't pick the phone was that "he fell down in the shower"

In the other hand, the other girl who works here was in the kitchen where we have an oven and microwave, and she decided today to have meat as lunch. So she cooked meat in the oven, and she also forgot the meat there and she burned her lunch. Outcome? all the fucking place smells to food and fume. Even my hair and clothes.

This kind of things really piss me off

Yeah! MAYBE, perhaps, they will not make me pay 2000$ to certificate the warranty because my warranty is the same tittle deed that mom used to rent her apartment to the same landlord

All the dispute with the seller on Aliexpress is done. Of course they had to refound the money to me. I'm not buying again there, no point when I can find the same products on eBay. More than 3 months waiting for something that I paid but they never sent? waste of my time.

In the other hand I'm waiting my order from ColourPop Cosmetics. Now they do international shipment but I get it free

I bought many colors I want try, like clasic red and some metalic lipsticks.

This week I'm receiving my last order from BH Cosmetics. I will have fun with make up

For sure I will choose a blue eyelash mascara because we like it and I wanna try.

4 days left to Mike's birthday and I still don't know what I can give to him. He says that all he needs is I be happy and he doesn't want I spend money in gifts. He told me "take whatever u was think to spend and put on bank, save for us when together", but he is not talking about vacations

More good news about the apartment! I just saved 3540$ in the contract to rent the new apartment! HAHAHAHA so happy!!!!! And this is because they doesn't need to check the tittle deed

So the only I have to do now is sign the contract and pay the rest. They also want I move this month, but I will wait till next month since I have to pay the rent in the apartment when I'm now.

I just order a curtain to the bath because I don't want clean the bathroom when I take a shower. Mike wanted I buy the blue but it doesn't match with the bathroom colors! I chose the black and white with flowers 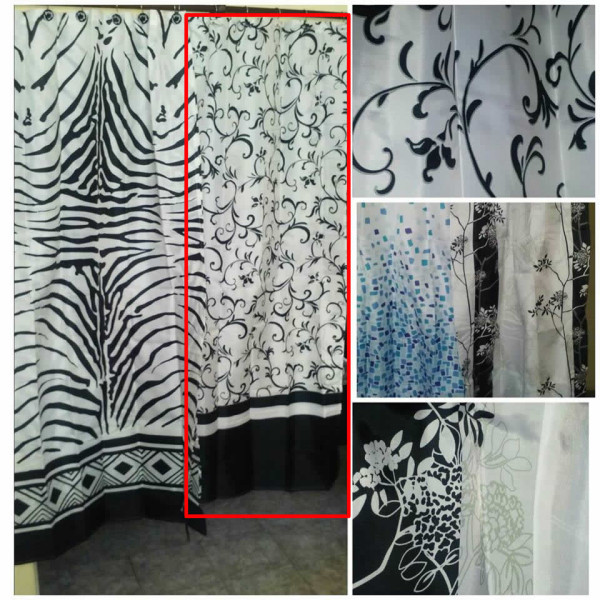