I woke up first than Mike, as usual, then I had breakfast: caramel coffee with oatmel cookies... delicious. I woke mike up and give coffee to him. Since it was late to go to the beach we went to the pool. There were many people. 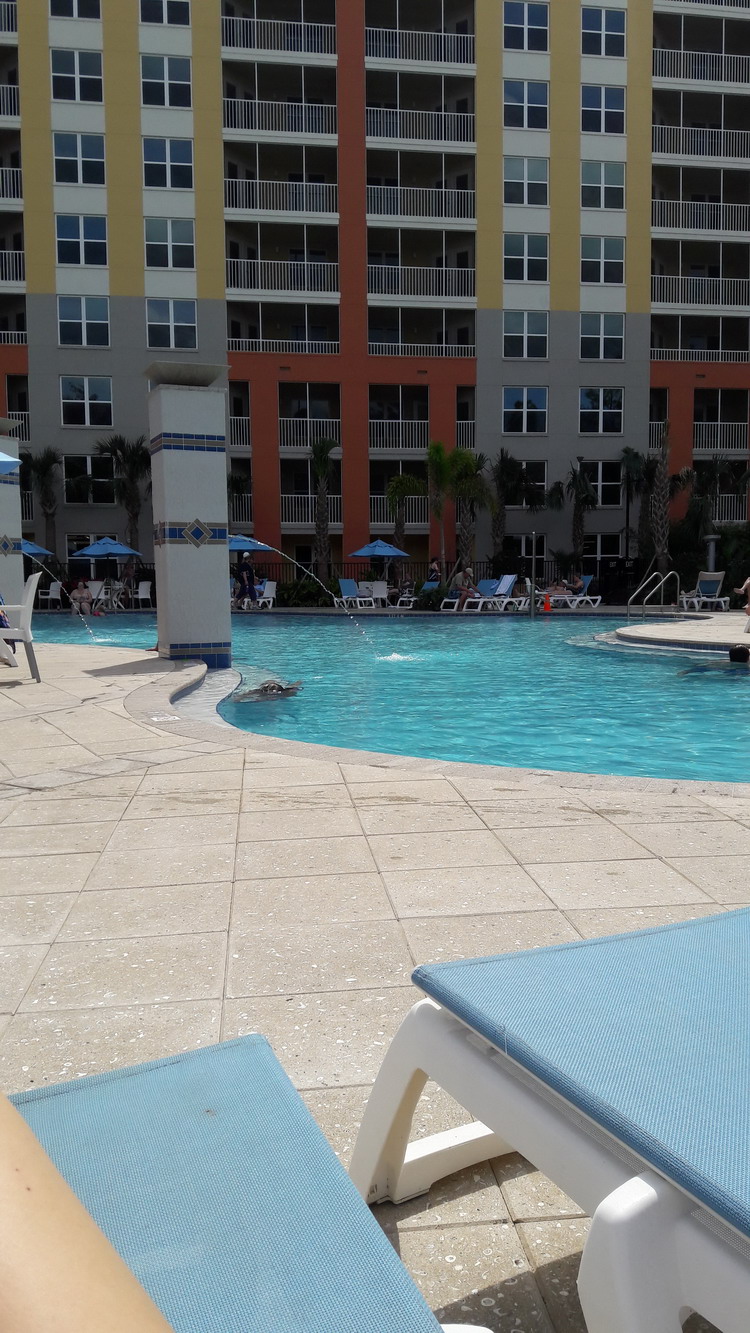 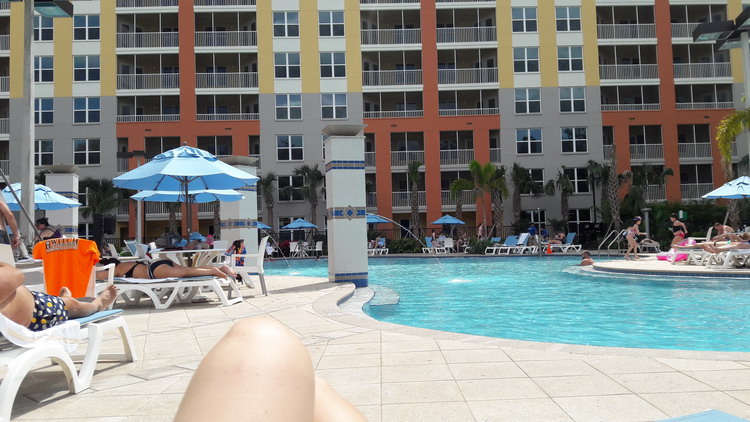 We lie in the chairs and we read our books.
I chose a book from Michael's books (yes, he again brings like 6 or 7 books). The book is called "Service a Navy Seal at war" by Marcus Luttrell. It's a thrilling war story and tribute to the Seals team, which I would later discover that talk about Chris Kyle, the sniper I was looking a movie on the plane.
We went to the water and we have fun playing like kids. I carried Mike and I walked for all the pool, then I jumped on his back and he took me to each corner of the pool. This is what I enjoy about Mike, he's always ready to do stupid things with me, and what I like about american people is they don't give a shit about what other people do, nobody is looking at you or paying attention to you, so I can do any stupid or childish thing and nobody will care.
Next to the pool is a lake. We could see otters swimming there or playing outside. They were so cute!!! Everybody were looking them. A man who was few chairs next to us saw I was trying to see them, then he started to tell me when the otters showed up.

This is the lake when the otters were. 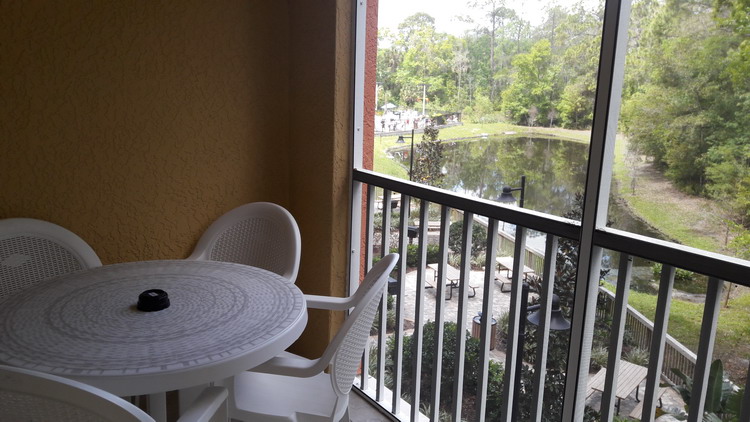 After pool we went back to the room and I tried to cook pasta... I say I "tried" because the sauce wasn't how I expected. This happened to me because I don't know English. Yesterday when we went to Walmart I was looking for some kind of cream we call "crema de leche". So I was there, in the dairy sector, and I saw milk, coffee mate, yogurt, and sour cream. I didn't know what "sour" means and I wonder if this was the cream I was looking for. The bottle had a drawn cow. I shaked it but I was not sure it was liquid. I took it anyway because it was the only which look like the cream I was looking for. But it wasn't the same cream. The crema de leche is a kind of milk very heavy but still liquid. The taste is very soft, not sweet, not salty... and for sure not "sour".
So I took the green onion and I cut it in tiny rings, I put them on the skillet and when I open the cream bottle and I saw what it was... fuck!!!!!! I got so mad!!! I called Michael and tell him it was not the right cream, then I started to research on google and I found that our crema de leche is called Light milk... nothing to do about. I used the stupid fucking sour cream to cook the sauce and I asked to Mike if he wanted it with his pasta ar not, because I didn't like. He said, don't worry let's eat it, not sure because the taste wasn't so bad for him or because he loves me so much lol.
We ate (I didn't finish my pasta, the taste or the angry was making me sick) then I started to try to make my first deck of Magic cards.
I had... I don't know... for sure more than 400 cards that Mike got for me, so making a deck seems like a hard task for me. For make things worse, Mike said "Nat let's go to the game store" and we came back with another box of cards.... 540 more cards

Our cards before go to the store 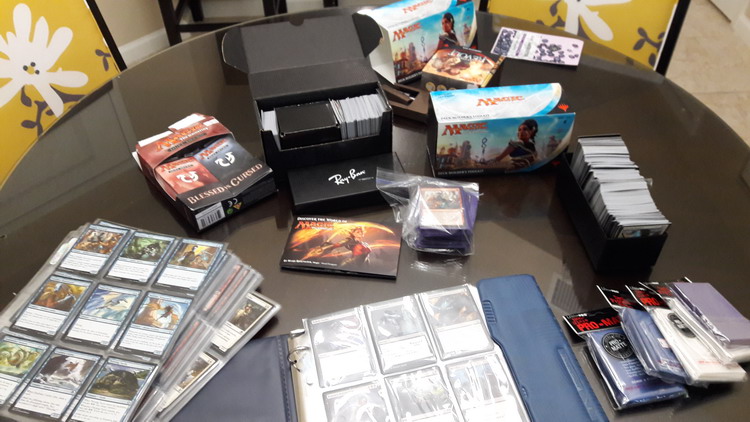 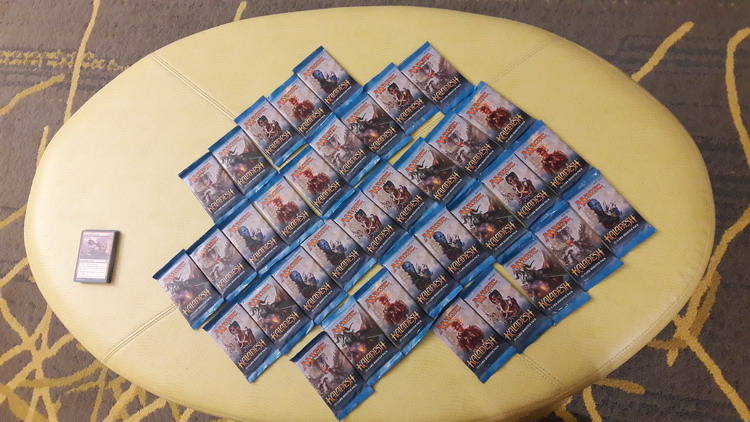 we started to pick the packs one by one to divide it.... I ended with all these packs and I got the best cards hahahaha xD 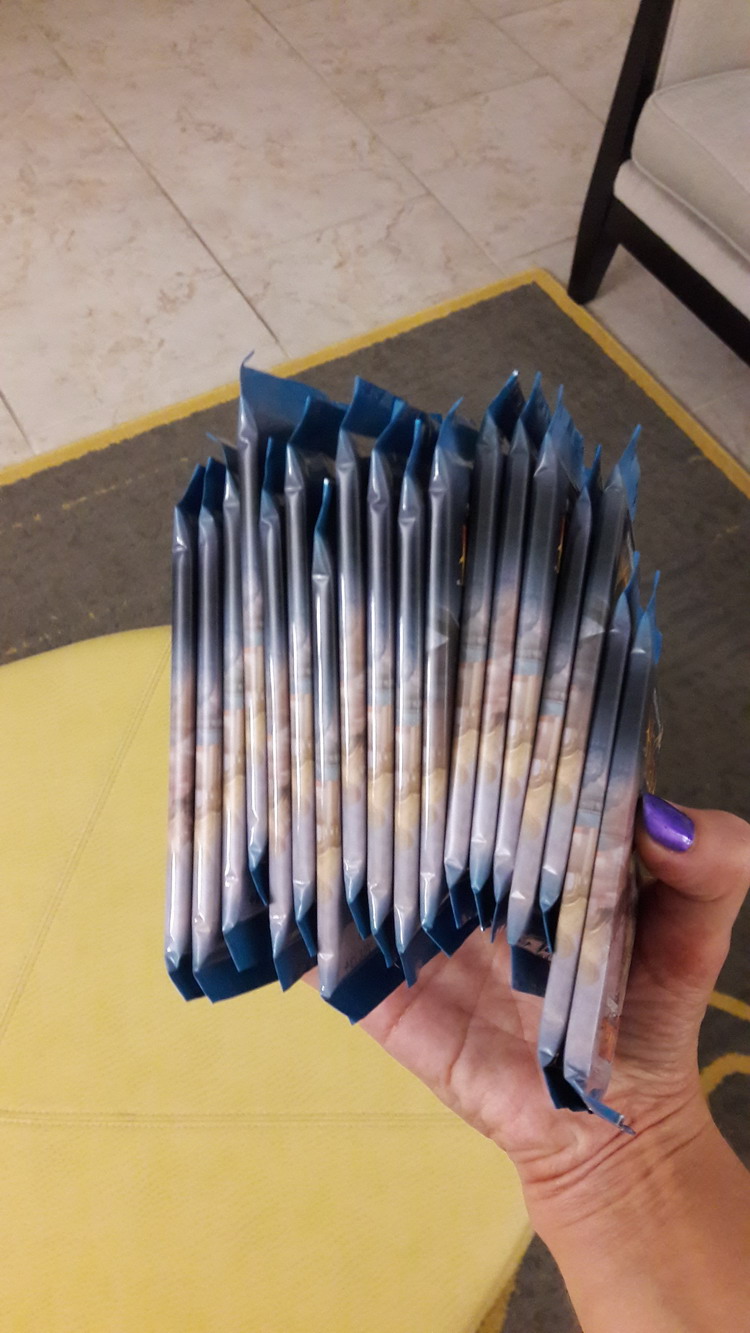 Obviously I couldn't make my deck that night, so we use some decks Mike got before to start playing, Cursed vs Blessed. It was my first time playing Magic, and I really like so much this game. Is a little hard for me to understand 100% how every card works because they are on English, but we both are learning (in fact, the first 2 days we wasn't playing the game correctly)
We went to bed and played a little more before sex and sleep xD

We woke up early (well almost noon) to go to the beach. After coffee, we took our books, towels and something to drink, then we drove to Clearwater beach, on Tampa. It was sunny and hot, a perfect day!
We got there at 3pm. I think this time were more people than last year. 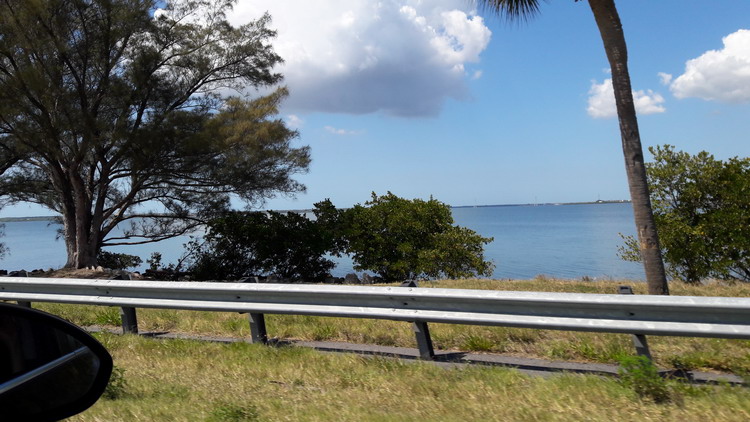 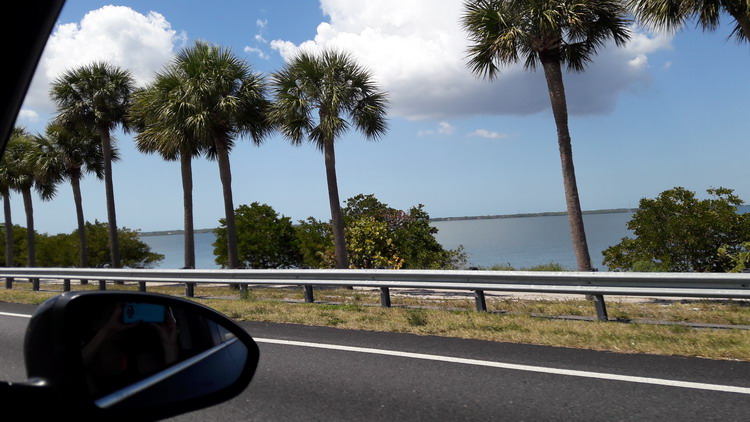 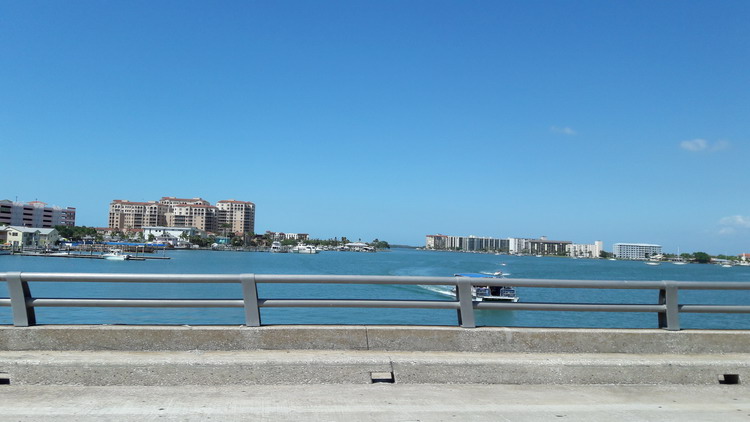 We rent chairs and we lie a little, the sun felt very nice. After a while we went to the water. It was colder than in August and with some waves, but very clean. After few minutes inside, I stopped feeling cold and we had fun doing our usual stupid things :P
When we had enough in the water, we went out and we lie down a little more, then I forced Mike to go for a walk. I feel again that americans are very nice people, at least in Florida. I didn't see any woman trying to get attention showing her body, or men acting like superstarts, something typical in my country. People like saying funny things to others and Mike is always joking with everybody, it makes me never uncomfortable or ashame. 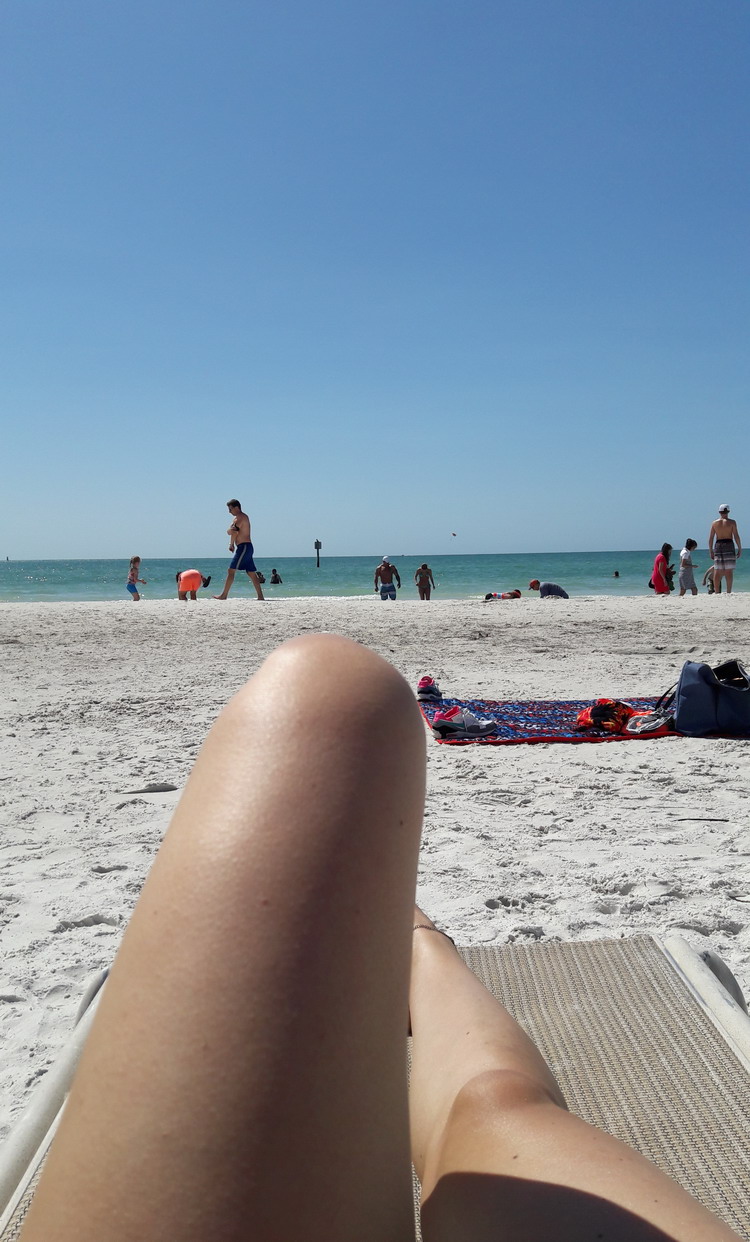 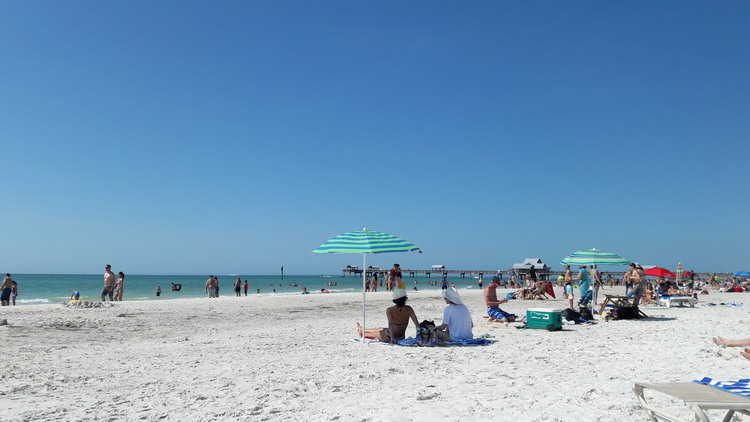 birds looking for something to eat 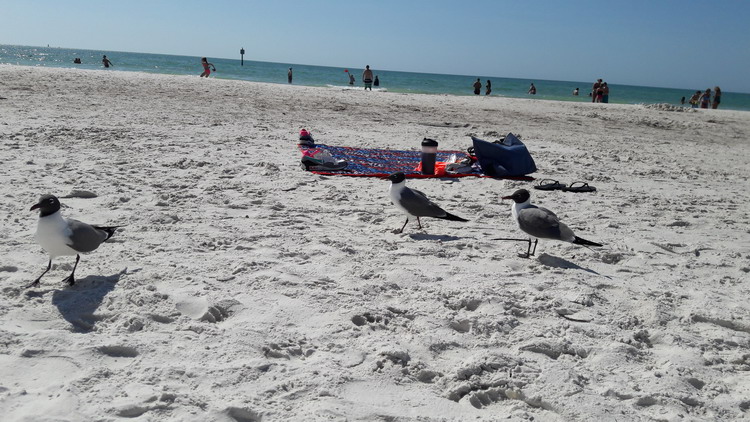 We tried to take some pics but I always ruin all the pics closing my eyes or because I look dumb... so I just post this pic of Mike kissing me because he's so cute 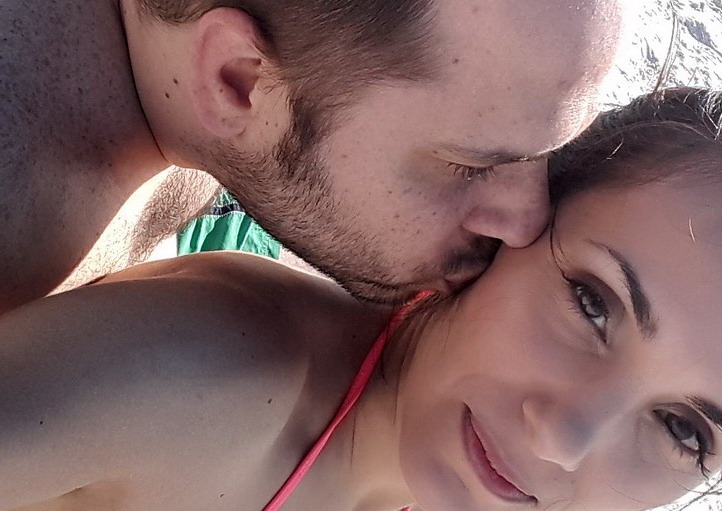 At 6pm we were starving so we left the beach and we drove back to Kissimmee. 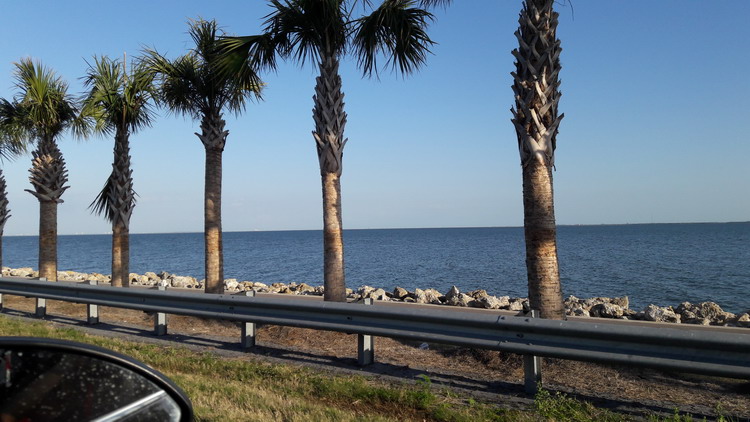 We went to the game store to buy more cards... and card sleeves... and deck boxes... and dices!!! I got some Pop games toys of League of Legens for Flor.

When we back in the hotel Mike cooked a delicious meat and I made a salad with spinach, carrot and baby tomato. After it I continued making my deck wich again I could finish. Here my stuff 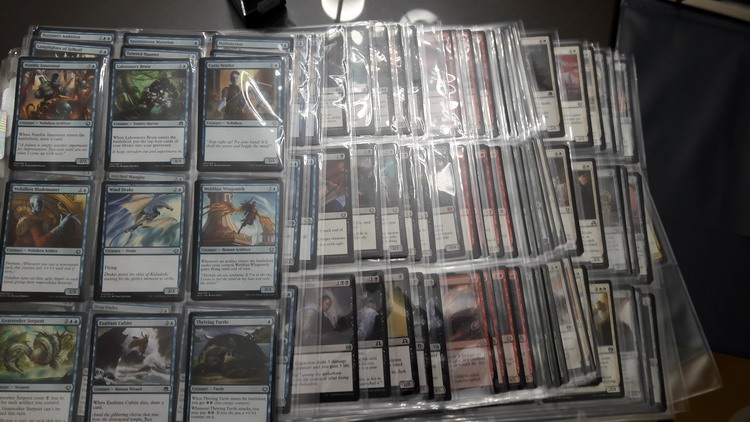 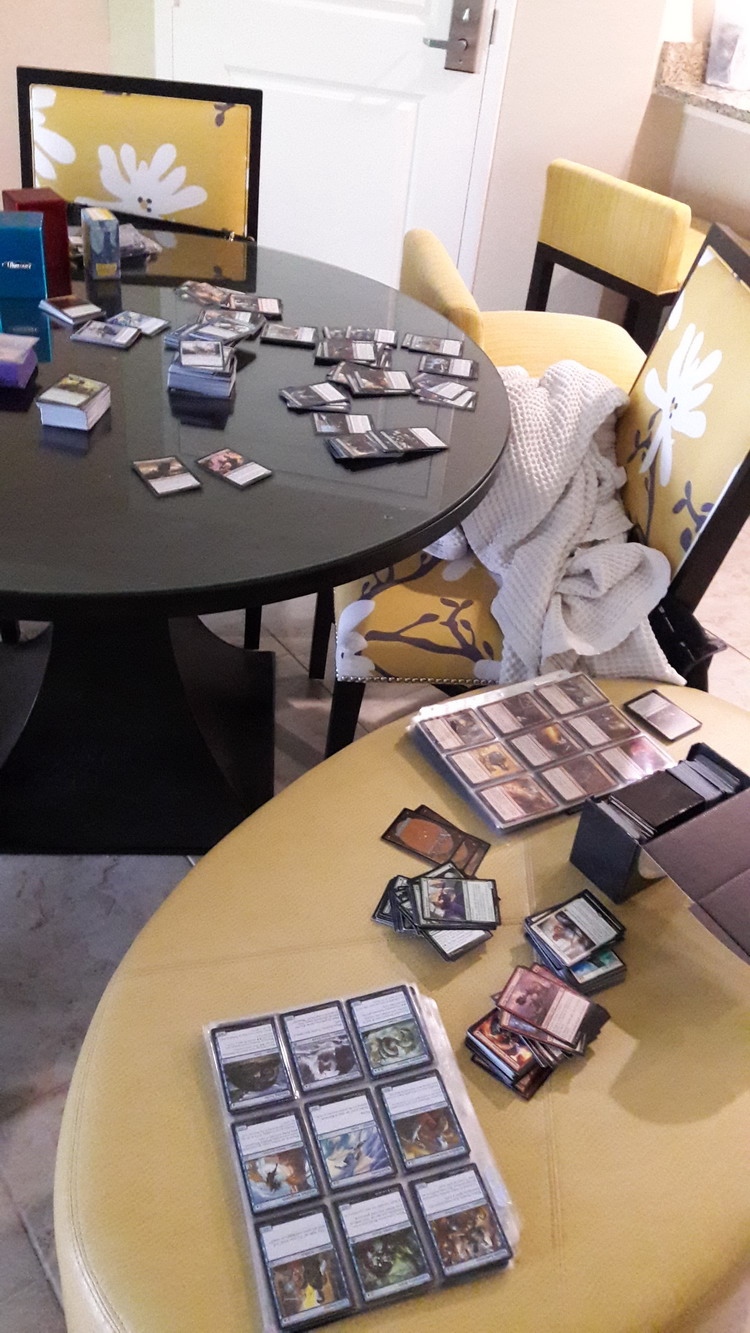 We played untill 6am then we went to bed, this game is really funny!