My sister and I did plan to go shopping because she knew a place to buy cheap school uniforms and also clothes. Mom wanted to come with us so we went to pick my sister and niece to their house and we all went to that city. It was a very bad idea... as soon as my sister got in the car, she and mom started to argue and also to yell... my sister is exactly all that she hates about my mother: agressive, intolerant, hater. I tried to ignore them but I knew it was going to be a shitty day.
The first place we wanted to go was the store to buy the school uniforms. My sister asked for the v-neck shirt and the skirts but they said it was out of stock. I needed more than those but we decided to look for another store so we looked for it on Google...another bad idea. We walked to those stores but they don't sell the kind of uniforms we were looking for. After walking and wasting 1 hour of time we were in the same place where whe were at the start. I bought some clothes for the uniform in a store then I went back to the first store. They had all that I needed for Martu's uniform... I spent more money than I wanted but it was necesary. At this point we all were hungry but we keep walking trying to get white dresses to wear in my niece's party... oh yes, dress code is white clothes and I'm not happy about that.
We went to few stores when my mother proposed to move to another city. My sister was agree but I didn't wanted because the stores in that other city are expensive. I told that to them but Ilet them decide. We bought lingerie in a store then we moved to the other place.
The first store we entered had normal price but we couldn't find white clothes that we like. As usual mom didn't remember were the stores that she wanted go were so we started to walk. I tried a lot of white dresses that I didn't like and which were also expensive. My sister was moody and complaining althought we were in that fucking situation because her stupid dress code. Mom was upset with my sister, and I was tired and hungry with a bloody headache. All that I have was less than half banana split frappuccino from Starbucks. 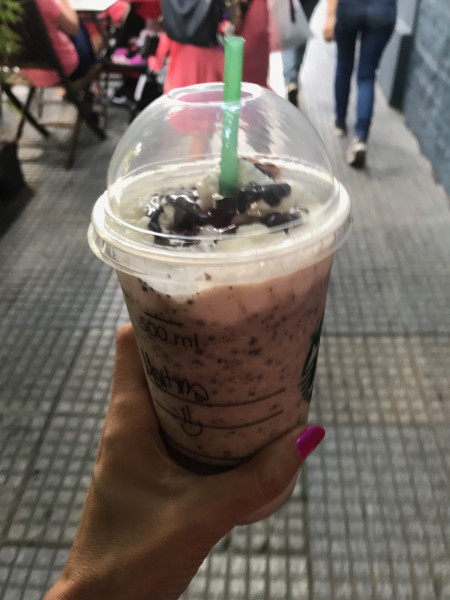 After 2 hours walking and trying white clothes we were ready to give up when mom's friend told us where we could go to buy nice and cheap clothes. It was our last try. In the second store we were, we all got white dresses which fit us. The one I got was very cheap. I liked it because it's very simple dress and the fabric is soooooooo good. It cost me 17 dolars!!! 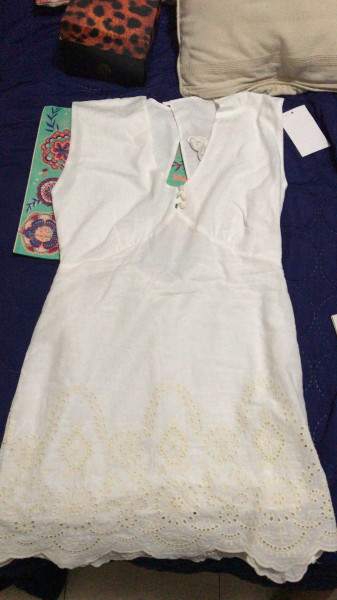 I also got a cheap dress for Martu in a expensive store for teens. I was not going to spend so much money in white clothes which probably we won't wear again. It was a very shitty day but at least I got all that I was looking for. I went to sleep to my house.
Self-note: never do shopping with mom and my sister together anymore.

I had appointment with the surgeon at morning. I wanted to know how much it cost to get ride of my eye bags. I knew it's expensive but anyway I needed to know the exact number, get disappointed and accept my face how it is. Went I entered to the Dr office and I told him why I was there, he made a gesture like if he could guess it before I open my mouth. The first he said was that he does not recommend me to go for a surgery, not just because it's expensive but because my problem is not so bad to go for it. Instead the surgery he recommended me to try with a laser treatment which tightens and rejuvenates the skin, so it can helps to attenuate my eye bags. The laser cost 150 usd against the 1400 than the surgery costs.The only bad thing is that the skin of my eye bags will be purple for few days but I think it worths to try!!!!Even if this doesn nothing on my eye bags it will does something on my eye skin.
I'll do the treatment on March or April. I don't expect it does magic but I hope it helps me to stop my obsession about my eyes.

Mom had appointment with the same Dr later that day so Martu and I waited at home for her to come to pick us. We went back to the weekend house. When we arrived one friend of mom was here waiting for us. He came to organize a dinner for the next night, oh well it seems we will have guests every day while I stay here???? He asked me for help him to set up his iPhone, which I did, then he used this excuse to add me in whatsapp. Later that night he messaged me and it seems he will do it every night the next days. This is the reason why I try to avoid human contact.
He is 47 years old, single, no kids, not sure what his profession is but I know he owns some houses in this place. Obviously, a rich man. He looks pretty normal, not ugly not sexy, just a normal man and he is showing interest on me, in fact the other friends of mom started to make jokes about this. That just make me more uncomfortable. I don't know if I became too old or too antisocial but I don't like men flirt to me. Instead of that I will like if he acts like a friend and stay in that place. Otherwise I have not interest at all to talk to him. Other woman in my place will take advantage of a man like this but that won't be ever me.

When this guy left, Martu wanted to practise to ride the bike, so we did. It was hard to do with the big bike because it's heavy for her to control it and it's also heavy for me to hold its weight and also Martu's weight so I took the small bike, which is very small for Martu, and I raised the seat and the handlebar. Now it was easier for we both to deal with it. After a while I was able to release the bike without Martu falls down, then I ran to her side ready to hold the bike if she lost her balance. It was not necesary but anyway I ran like for 30 minutes. It was a good way to exercise!!! Martu was so excited and happy laughing so hard that sometimes she lost the control of the bike because laughing. That made my day :)

We came back to the house to have dinner then Martu wanted ride the bike again. She wanted to go to the cross, I think it's 1 km away, but she tricked me!!! we did few meters then she stopped saying that she wanted to try the big bike so we changed bikes... can you imagine how I looked riding a kid bike??? she didn't want to change it back and I let her enjoy the victory. I don't remember how I felt when I learned to ride a bike but I want she keeps a good memory of this day.
After few minutes we got the cross and stayed there a little, in the dark of the night, under the stars, running here and there, laughing and taking photos. Riding that small bike killed my legs and made my butt hurts lol but who cares, it was a great night :)
Collapse